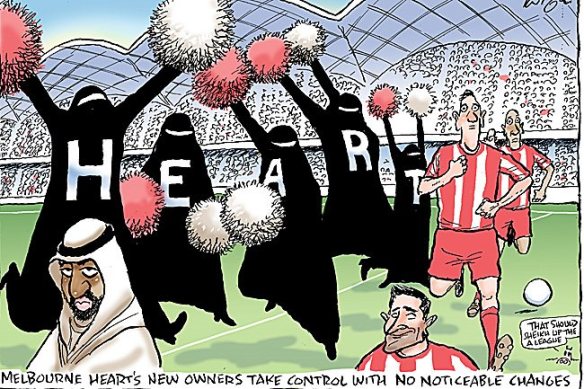 While the odd twits on twitter immediately ran with it accusing the HS used the cartoon to “welcome” the investment of money by the Arab-owned Manchester City, it wasn’t until SBS and their theworldgame website that a full exploitation of it came to fruition. Philip Micallef, who says he did not derive any pleasure from writing the piece, said this:

In a case of bad taste at best and blatant racism at worst, it published a cartoon depicting an Arab sheikh and a set of ‘cheer girls’ dressed in black burqas ushering the Heart team onto the field. A caption read “That should sheikh up the A-League”. What on earth was the Herald Sun thinking?

Did it think at all about the ramifications of publishing such a tasteless cartoon in the present political climate? Did it realise that as host country of the 2015 Asian Cup it is Australia’s obligation to welcome the participants not poke fun at their culture? Did it really believe that its hundreds of thousands of readers would approve of such ignorance and opportunism or, more seriously, find it funny? Did it honestly expect to get away with its flagrant disregard for basic human courtesy.

Australia arguably embraces multiculturalism like no other country and the Herald Sun’s cartoon went against everything that we stand for. I refuse to believe that there were more sinister motives at play here like purposely damaging the event’s credibility behind the publication of the controversial cartoon. However if the newspaper’s intention was merely to have some fun, surely it must have known that what is considered ‘just a bit of fun’ by us might not be seen as ‘fun’ by people from a different background, whether they live in Australia, Indonesia or Iran.

Ironically, Micallef’s description of the cartoon, “depicting an Arab sheikh and a set of ‘cheer girls’ dressed in black burqas ushering the Heart team onto the field”, is stunning for its accuracy and simplicity. Should the girls be dressed in bikinis? That would have stripped these women of their basic human courtesy. The intention of the newspaper was to satirise the news, as it does every single day about the biggest story. In a country that arguably embraces multiculturalism like no other, then no group should should be excluded, or we make a blanket law that protects all groups.

The real heart of the issue is not this cartoon by the HS, it’s again this vendetta by SBS and “us”, the football public, against a news operation because we are so insecure and precious about our flaws in the game. Craig Foster, in his Fairfax column about the purchase, also made a sleight at “half” of the media in Melbourne, only because that “half” doesn’t have him on their payroll. This grievance is built particularly that certain media outlets have the temerity to report crowd trouble and violence associated with our game, and therefore are anti-football. While I, the biggest proponent of free speech, especially when it comes to satire, did find this cartoon a little unsavoury, in no way would that suddenly propel me into a tirade of ridiculous claims of xenophobia and that a news operation is trying to destroy the game in this country and create racial hatred. At most, I’d suggest HS is better than this, that it doesn’t match their general reportage of the game, so is it worth the risk of upsetting their true enemies? No, not the risk of upsetting Muslims. They’ve actually fled to this country because basic freedoms are allowed. It’s the risk of upsetting the rapacious and hypocritical traditional football media. If a Catholic-run club bought MH and the cartoon had a group of priests cheering with “GO BOYS” across their tummies, would there be an issue? Not only would we all be laughing it up, the cartoon would be immediately inducted into the Hall Of Fame of Cartoon Satire.

If only such scene as depicted were even true. In these despotic nations, women aren’t even allowed to attend games. The only time I’ve seen such a breach of this ultra sexism and misogyny was after the Iran Game, where TV scenes in Tehran showed women “breaking free”, to fill the streets and the national stadium, unable to keep further suppressed their desire to grandly celebration their nation’s success. Yes, they were dressed like this, except for any lettering on their clothes, nor carrying pom-poms. Mark Knight, who is a superb satirist and indeed has mocked the Catholic religion in cartoons because NO one is immune to his wit, erred in that he should have used sheikhs, not women. Then again, what message is actually offensive? I see a despondent sheikh annoyed that women are out celebrating a football team, and this could shake up the A-League. Or maybe it will shake up the Islamic religion? Maybe it’s our own sensitivities that Arab Oil and Tourism, often built on slave labour, are funding this new club. Much like we’re aghast that Qatar “bought” the 2022 World Cup. Instead of confronting our insecurities, we attempt to brush it aside, and throw around labels like “racism” and “xenophobia” to distract from our own uneasiness by tarnishing someone else. The classic case of self-absolution by diminution of others.

It wouldn’t be so deceitful this crusade against HS if there was at least a minuscule attempt at balance by SBS. Fine to trash them for the cartoon; it’s disgraceful to use it to impugn the daily coverage as anything even remotely near similar. On the day of the announcement, the HS homepage had a massive headline reporting this great news. That led to at least four fully featured articles of news, opinion and video – all positive. In fact, you could visit HS every day and look under sport then football (note football, not soccer), and see an expansive and positive coverage of our game. When is that ever mentioned by SBS? Never. Of course, it doesn’t tickle the agenda of biased media against our poor, wretched souls struggling to survive. So it’s the cartoon, the once since probably never cartoon, that gets all the attention.

The absurdity of our crusade is even more ridiculous when our goal is to make football mainstream. There’s no bigger mainstream newspaper than the HS, serving the biggest A-League and sports market of Melbourne. Instead of recognising their otherwise superb coverage of the game, we continue to malign them, and push a lie. When SBS was an outcast from A-League coverage because they snubbed the inaugural rights and almost weekly either by Les Murray, Craig Foster or Jess Fink via their TV shows and website undertook hit-pieces against the A-League, who’s been responsible for the huge resurgence and growth and knowledge of the domestic game? News Ltd – via Fox Sports and their newspapers, with Fairfax also superb. They rescued the domestic game of which now SBS can capitalise upon. Without these mainstream organisations exposing the sport to the mainstream, the sport would barely register beyond that of the NSL days. A reader’s comment in Micallef’s article said he’s never read HS, yet here that person goes making judgements – judgements based on total ignorance and the football community’s agenda of bias and deceit alleging an anti-football media. While SBS is still doing hit pieces on News Ltd, isn’t it any wonder that people like Rebecca Wilson will still reciprocate against us?

If there’s one thing I’ve learnt as a reader of all media, and with subscriptions to News Ltd and Fairfax, is that those claiming bias are the most biased people themselves. Politicians and their sympathetic stooges are notorious for it. We, football, are even worst, being the most precious and insecure lot in history, and with still so much growing up to do. We’re the ones painting football in a bad light. We defend loutish behaviour at A-League games by condemning any media that dares report it. We now refuse to question our concerns raised by a satirical cartoon about Arab money flowing into the game. Of course, it’s Arab money that owns an English football club as well. Oops, that’s another concern. Anything British influencing the game in this country is supposed to be extirpated; what happened to that crusade? Yep, washed away once Arab mega dollars are thrown into our face.