It’s a sign of the times when the England XI contains only one recognisable name in Danny Drinkwater. That was only because I’d tuned into two of Leicester City’s late season games as they won that memorable English Premier League title. On the bench was Wayne Rooney, the only surviving member when the two teams last met – a 3-1 loss in London in 2003. That was about it. With the A-League growing and becoming more and more relevant to Australians, the English Premier League has taken a backseat in this small realm of the universe. Perhaps it’s even beyond the backseat and now dragging along the road from the back of a trailer. 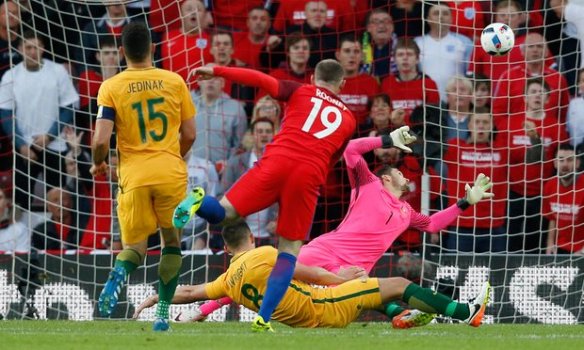 More than 2003, this match was experimental: England in preparation for Euro 2016; Australia for World Cup qualifiers in September. While Australia were at full strength in 2003, in 2016 they were without 6 players from Asian leagues. This match was not on an official FIFA international window. England were also experimental, making 8 changes from their 2-1 win last week against Turkey. It wasn’t as bad as 2003 when the entire team were changed at half time. Even then, come the 60th minute, the game fell apart, as is often the case with these types of matches, when both teams made an endless stream of substitutions.

It was a disastrous and unlucky start for Australia, conceding just after two minutes when Marcus Rashford (who?) scored from close range from a deflected cross. Raheem Sterling (who?) also nearly got on the end of a good ball after 35 minutes. Otherwise, Australia dominated possession for much of the rest of the half, without creating many serious chances. They started just as well in the second half, only to be hit on the counter attack on 55 minutes with Wayne Rooney blasting home from just outside the box. Australia snuck one back on 75 minutes after substitute Eric Dier (who?) scored a poor own goal.

For all of Australia’s pressing, Fraser Forster (who?) only had one serious save for the match – that, late, off Robbie Kruse – as Australia remained poor with their final passes and shooting. Kruse was decidedly off for the night, while Tom Rogic returned to old habits of fluffing too many good shooting chances. Massimo Luongo seemed lost at times. Easily the best player was Aaron Mooy, who’s passing, vision and thought processes often seemed miles ahead of his team-mates’.

Overall, a decent effort and 2-1 a fair result. Australia need to do more with possession to really take the next step as a serious international team. England constantly looked dangerous on the break, as we’ve already seen with Asian teams exploiting Australia’s gameplan. Possession is useless if you do nothing with it, and by the game’s end England led that statistic anyway, 51-49.

It’s now two matches at home against Greece for Australia, the first next Saturday, and hopefully it’s solid performances from a solid test with solid results.