Less than 12 hours after Australia beat Syria 2-1 in extra time and 3-2 on aggregate to progress to the final stage of World Cup qualifying, the nation awoke to news that coach Ange Postecoglou would quit the Socceroos at the conclusion of the campaign whether Australia qualifies for Russia 2018 or not. While he hasn’t explicitly confirmed media reports are correct, he hasn’t denied them either, saying: “My sole focus is on preparing the team for the final two qualifying matches. I will not let anything compromise the team’s journey on getting to a fourth consecutive FIFA World Cup.” The FFA echoed those sentiments, saying there’s plenty of time between the last qualifier and the World Cup “to lock in our set up as soon as possible to maximise our preparation time”.

It’s believed frustration at the growing criticism towards Postecoglou, specifically about results and the change of formation mid-campaign, is the reason for the early departure. If that’s true, it shows a remarkable weakness in resilience and a capitulation in belief of both he and the team. Not to mention it would seem completely out of character, especially for someone that boasted about playing “the Australian way” and leaving an imprint on the game. It’s almost un-Australian. Or is it?

If you consider the true Australian sports psyche, it is actually one that fails under pressure, and is notorious for quitting when things get a bit tough. Cathy Freeman denied herself an almost certain second gold medal by quitting athletics a year before the Athens Olympics, while Ian Thorpe began to experiment in other disciplines and distances, and eventually became one of our biggest sooks ever. Sound familiar? Australia’s reputed fighting style really only exists when backs are to the wall – essentially when there’s nothing to lose and there’s no pressure at all. When leading and being challenged, it will either succumb or try to escape. If escape is not possible, the coping mechanism is to try bully past the opposition, which invariably makes capitulations even worse. The debacle in swimming at the Rio Olympics is the most recent example, while the Test cricket team’s history is blotted by regular and notorious batting collapses. Now it’s Ange’s turn. It’s all suddenly a bit tough, and rather than fight it out and attempt to achieve a good result at the World Cup, it’s get out while you can. If that’s true, it will be a really sad epitaph on his coaching career.

The match itself was microcosm of the entire campaign with the task made more difficult than necessary by defensive blunders, sluggish transition between defence and attack, and wasted scoring opportunities both with final passes and shots. Syria scored after 6 minutes when Mark Milligan conceded possession in midfield, and while Australia equalised only seven minutes later thanks to Tim Cahill on the end of a sublime cross from Mathew Leckie, the game remained on a knife’s edge thanks to the odious away-goals rule. Remember, under this idiotic rule, if Australia conceded another it would mean they’d need two more before full time to avoid elimination even though it’s 3-3 on aggregate. Hardly an incentive to attack while playing at home, is it?

Despite dominating possession for large portions of the match, Australia didn’t create too many chances, much less score. It took Cahill – yes, him again – to rise in the box in the second half of extra time to head a cross from Robbie Kruse home. Naturally, that compelled Syria to desperately attack, and it was only a matter of inches that they didn’t score from a direct free kick in injury time of extra time. The ball struck the post and went wide. Poetic justice, you might say, as Australia had struck the post so many times in their previous two qualifiers. That included the final group match against Thailand, and the away leg of this series, played in neutral Malaysia, that finished 1-1. That was a fair result anyway after Syria was as good in the final 30 minutes as Australia were in the first 60 minutes. Even though Syria’s goal came from dreadful penalty call on Leckie, they really should have converted one of their numerous chances beforehand. 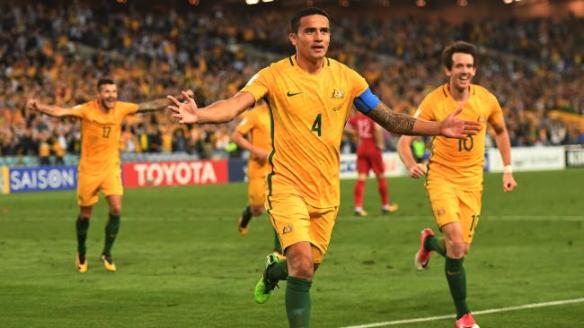 After a crazy final round of matches in CONCACAF, Honduras awaits Australia. USA were third on 12 points, with Panama and Honduras next on 10 points. Panama was in fourth – and the expected playoff opponent – thanks to a +5 goal difference over Panama. The final matches also favoured table positions remaining unchanged: Panama vs Costa Rica, Honduras vs Mexico and Trinidad & Tobago vs USA. USA only needed a draw to bottom team T&T to be safe or hope both Panama and Honduras lose. Instead, all three matches ended in upsets as the USA lost 2-1, Panama scored late to jump to third and qualify for their first ever World Cup, and Honduras beat Mexico to jump to fourth, leaving the USA eliminated.

Until the win over Mexico, Honduras’ only other points came from two wins against T&T and a draw against USA. While those mediocre results seem encouraging for Australia, their coach said they were unlucky through the group phase by conceding goals – and points – late in several games. Also note Honduras have qualified for the past two World Cups and the last time they played Australia at a meaningful level was at the 2000 Sydney Olympics when they won 2-1 and sent the Olyroos packing on the official first day of the Games (Australia lost 1-0 to Italy a few days prior). Countering that, Honduras lost all three games at Brazil 2014 and only managed a draw at South Africa 2010. Australia’s record is better having won and drawn in 2010 and performed really well in patches against Chile and Netherlands in 2014 despite losing all 3 matches. The teams seem well matched, and Australia is reputedly in the favoured position of playing home last. That might actually have a tangible benefit this time as Leckie and Milligan will return fresh after being suspended for the away-match due to accumulated yellow cards. Let’s hope Honduras don’t put the tie away before then.

The big concern is Ange Postecoglou. Is their still enough trust and belief within the team to play for him? Will he amend some of his stubborn tactics to ensure no soft goals are conceded? The incessant tactic to always play out from the back has made the team so predictable and easy for the opposition to apply pressure from midfield and force turnovers in dangerous areas. Syria capitalised in Sydney, and there’s no doubt the speedy Hondurans will be looking to do likewise.

The other problem is the team itself. It simply isn’t that good. It’s relying too often on a 37 year old part-time player to get it out of trouble. It’s never settled, with Postecoglou bizarrely starting Aaron Mooy on the bench at home to Syria. Thankfully Brad Smith was injured early to force Mooy on and undo the stupidity. Postecoglou seems obsessed with developing a good squad rather than a good team and possibly that’s his tacit admission of our weak playing stocks, and also his frustration that he can’t “change the landscape”, that it’s a recognition that he’s reached a limit with this team, and the team itself has reached its limit, and the system itself is too limiting for him. Win or lose against Honduras, it is the end of an era, and the Australian national team will face a restock, if not a major reboot.

Curious stat: With 48 goals, Australia has scored the most goals of any team in World Cup qualifying so far. Playing a long campaign of 20 matches no doubt helps.