This World Cup was always more about hope than expectation, and that hope was only ever a tentative one. A solid performance in the 2-1 loss to France provided a small spark of hope that Australia could beat Denmark in their next match and set a strong course for the next phase. That spark quickly extinguished when Denmark scored early, only for it to reignite when the Socceroos equalised not long after. Alas, no. Despite dominating much of the game, Australia were unable to get a winner, so were faced with the double jeopardy of beating Peru and hoping France beat Denmark.

Entering the final game against Peru in Sochi, it was almost a continuation of the Denmark game. Australia dominated early, failed to convert opportunities, and then went behind on 17 minutes. Four minutes into the second half, it was another goal for Peru, and any flickering hope we had now changed to putting us out of our misery and ending this campaign that always seemed forlorn. A late Peruvian shot hit the post to avoid a more embarrassing 3-0 loss. Not that an Australian win would have mattered, as France and Denmark only needed a draw to qualify first and second, and 0-0 was the not so unexpected final score.

Aaron Mooy sums up Australia’s disappointing World Cup campaign after their 2-0 loss to Peru in their final game at Russia 2018. Image: fifa.com/Getty

In fairness, Peru were the second best team of the group and should have progressed. They dominated much of the action against Denmark and France with 27 shots on goal, and shot a penalty over the bar against Denmark. They lost that game that they should have won, meaning their match against Australia was only for pride. In victory, they looked as despondent as Australia did. Not only were Peru more deserving to progress, and more lethal when required, they also out-played Australia strategically. In contrast to their two frenetic opening games, knowing Australia had to win, Peru let Australia do all the running, and picked them off the break.

Peru’s opening goal was simply a lob over the top that was passed across the box for a running Andre Carrillo to hit first time into goal. Calls of offside were dismissed as Trent Sainsbury got a foot to the ball to annul the possible offside. It was Peru’s first real chance of the game, whereas Australia and several opportunities, and continued to create them. The best being a low cross by Robbie Kruse that saw Mathew Leckie just fail to connect while under pressure by two defenders, Tom Rogic shooting meekly at the goal-keeper after skipping past four Peruvian players, and an Aziz Behich volleyed cross that failed to find an open Tim Cahill. 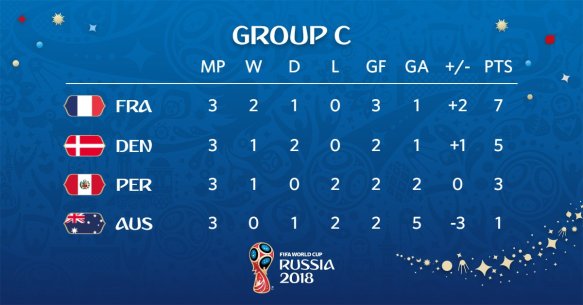 A disappointing end to a totally disappointing campaign. Even the qualifying campaign was disappointing, with the team constantly conceding goals and having trouble to score goals. It came down to an intercontinental playoff against Honduras, in which, after 0-0 in Honduras, Australia won 3-1 in Sydney, thanks to a free kick and two penalties by Mile Jedinak. In Russia, it was all too familiar. Conceding goals, and the only two goals scored were penalties to Jedinak. While the lack of a killer edge up front was clearly obvious, facts are the perennially leaky defence could never be fixed. Ignoring the less relevant fact Australia hadn’t kept a clean sheet at a World Cup since the 0-0 against Chile in 1974, the more relevant fact is through the entire World Cup cycle for Russia 2018, defence has been a problem. The glaring reality is if Australia could have denied France one of their goals and Denmark their goal, they’d have made the next round.

In hindsight, there doesn’t seem much more Australia could have done. The most glaring situation was when Tim Cahill not brought on against Denmark when they were ripe for the picking. When Andrew Nabbout was injured, it’s fair to say most people were surprised that Tomi Juric came on instead. This was at a stage when Denmark, with France as their final game, were clearly happy with the 1-1 score, and were playing tentatively. Australia was in desperate need of a big moment and Tim Cahill is our big moment player. It wasn’t until Peru that he got a run – not long after Peru went 2-0 ahead – and it was all too late by then. To his credit, in that limited amount of time, he had a shot blocked after a corner, and would have had a goal at his fourth World Cup had Behich crossed better.

It would be unfair to criticise Bert van Marwijk too harshly as he arrived with only a limited amount of time with the squad, and would have judged his playing selections by his own measure. Cahill played barely any club football in 6 months so it’s not right to compare the Cahill we’ve known all these years, or even a year ago, with the Cahill of now. Remember, Ange Postecoglou had been phasing Cahill out of his starting teams long ago, and indeed, it was Postecoglou deserting Australia with mission incomplete that compromised the team’s preparation. Van Marwijk’s first match was a 4-1 loss in Norway in late March, and fears coming to Russia were a smashing by France. That the team produced three creditable and competitive performances, and put themselves in a positions to win, is a huge tick for van Marwijk, and easily offsets the non use of Cahill against Denmark, especially since we can never know if he’d have made a difference.

PLAYER RATINGS FOR THE TOURNAMENT

Not at fault for any of the goals, nor made any miraculous saves or penalty saves. So it’s a “good” rating for doing his basic job.

Did little wrong at the back, other than almost conceding a penalty against Denmark, and not being quite able to intercept the pass that led to Peru’s first goal.

Solid in an unnatural position as a stopper next to Sainsbury. Had some good attacking flair too. Good to see him rewarded with three match starts after only playing one match in the past 3 World Cup campaigns.

Showed some good pace and got into good positions; unfortunately never resulted in much.

Not good enough at this level.

Reasonably solid in a defensive midfield position, and reliable with penalties. General forward passing was uninspiring, or went sideways.

Best player of the campaign. Let down by very few decent corner kicks, and he plenty of them to try.

Always looks neat and skilful on the ball, and played the two passes versus Peru that set up Kruse’s and Behich’s crosses. Otherwise, his work often results in very little, and he can’t shoot either. The World Cup is not like playing Motherwell in Scotland. Was substituted in all 3 games.

Another player that looks neat, or tries to look neat. He’s lost pace, and often when he gets into good positions his crosses are rubbish or are blocked. Was substituted in all 3 games.

Really stepped up when the situation demanded it. Fast and always looked dangerous. Unfortunately never quite had the support to capitalise on his work, and missed a great shooting chance late in the game against Peru by taking an extra touch.

Came on all all 3 games, always looked dangerous, and twice against Denmark nearly set up a goal. Unfortunately, no actual result for his effort so it keeps his score down.

Serviceable as the second midfield substitute in all three games.

An old fashioned target man, he was neither a great target or could create much himself. A substitute for Nabbout in the first two games; started the third before being substituted for Cahill.

Looked dangerous at times, especially with his speed. Never quite got the service. Missed the final game through injury. Was substituted for Juric in the first two.

Only appearance was as a substitute against Peru. Did as much as he could with his 35 minutes. Would have had a goal if Behich’s cross on 71 minutes vs Peru was better.

As much as we can pick at coaches, preparation, tactics, selections and even bad luck, ultimately, the players of this generation are not good enough. During the qualifying campaign it was noted that none of this 2018 team would get a start in 2006. Perhaps the possible exception is either Mile Jedinak or Aaron Mooy for Jason Culina. Not even Tim Cahill was in the starting eleven then, and now, at 38 years old, he is still Australia’s most dependable goal scoring option. Comparing to the other teams at Russia 2018, the differences are clear. One less touch, a bit more urgent, a bit more ruthless, a bit more tricky, even a bit more cunning. We need to be resigned to the fact that World Cup success below the top echelon of nations is about generations. All teams go through it. The likes of the Netherlands can go from almost a World Cup winner in 2010 to a non-qualifier in 2018, while Italy missed out too. It’s not about grand visions, technical direction, permanent playing styles, changing landscapes and other hocus pocus ideas. It’s about youth development and growing the game domestically to ensure the best talent is attracted to the game and a pathway is provided for them to reach their full potential. Then the final polish is made with coaching, tactics, strategy and general support. The hope now is the wait for that next generation of great players is not too far away.