With Winx such the dominant headline maker throughout the spring, the Melbourne Cup has suddenly crept up on us. There hasn’t been much thought about it – until now with the final jostling for positions in the race. On first inspection of the field, it was a case of “who” for about half the field. After a few preview shows and reading the newspaper,  suddenly the horses are like old friends and excitement is mounting.

Time for my annual selections, and hopefully they’re much better since I started posting them on this blog. Ironically they’ve been poor, even despite a few outsiders winning like Green Moon in 2012 and Prince of Penzance in 2015. My last two big wins were 2010 and 2011 with Americain and Dunaden. When I say big, I mean BIG!

Also, the Melbourne Cup is evolving. The international horses have firmly taken hold, whereas before 2010, they’d be regarded as scratchings. Even then, 2010 and 2011 were both French horses, while Protectionist in 2014 was German, so it’s fair enough to be skeptical of British horses. Even the Irish ones are in a significant drought, with Media Puzzle in 2002 the last winner. Also it’s worthwhile to be skeptical of international horses that haven’t had a preparation run in Australia. Since Vintage Crop in 1993, almost 100 first-timers have run and failed, mostly abysmally. Fifteen placings by 12 individual horses is the closest they’ve come.

Speaking of skepticism, the Caulfield Cup continues its poor guide to the Cup. Whereas once it was a pivotal guide, now it’s almost useless. The last Melbourne Cup winner to even run in it was Delta Blues in 2006, who finished third. It’s become almost a b-grade race full of horses that can’t get into the Melbourne Cup (due to proliferation of international runners), while horses targeting the Melbourne Cup don’t want to risk a penalty for winning the Caulfield Cup. Consequently organisers are removing that condition, and will raise prize money to make it a stronger stand-alone race of its own. It’s only possible value these days is noting the preparation run of any international horses.

Third last year when in much better form so easy to ignore. He’s a class horse, and they’re trying a new approach to run him fresher in the Cup, so a win wouldn’t surprise.

Result: Didn’t quite run it out last year, and in weaker form this year, was beaten a long way out. 20th

Last year’s winner and returned to the spring with a solid win, then a poor run. Also up 5.5kg on his original handicap weight last year (4.5kg up on race weight). Repeat winners are rare so will risk it.

Second to Winx in the Cox Plate and the class local horse. Running the 3200 metres is a query and he’s very temperamental and prone to over-racing. That’s enough to ignore him.

The son of a “teaser”. These are horses that get mares “into the mood” before the stallion arrives to do his job. Studs give the teasers a few shots at the end of the season to keep them interested, and occasionally something is produced than can run. It would be remarkable if that could be a Melbourne Cup winner. Tiberian has solid form so I might have something “small” on him. Otherwise, as an international that hasn’t run here, better to ignore.

Result: Started a long run 1400 metres from home, cruised up heading into the straight and only battled to the line. Disappointing. 7th

An international than ran home well in the Caulfield Cup. That proves he’s settled in, and with his obvious class and Hugh Bowman, Australia’s best jockey on board, is one of the ones to beat.

Result: A nice run just off the lead and then could only battle to the line. Another disappointment. 9th

Last start flopped; before that great. Had he a preparation run here, he’d be favourite. Do you want to risk it? He could be the one that finally breaks the fist-timer international hoodoo. Has last year’s winning jockey Kerrin McEvoy on board. He should cope with the widest barrier of 24, having done so (if I recall accurately) in 2000 with Brew. The widest is not too bad as it gives you a choice to drop back. If you’re a few horses in, then those out wide can dictate your settling position.

Result: Got into a good position and then, like Tiberian and Marmelo, battle to the line. 11th

I always liked this until a few others overtook him. I might still return. Third in the Caulfield Cup if that matters and solid in previous runs, with his only doubt being untested over the distance. These days, a distance doubt is a big doubt.

Result: Sprinted clear and looked the winner to be pipped 50 metres out. The jockey said the horse was going so fast he was surprised anything else could go better. 2nd

Previous Melboune Cup runs 16th and 13th. Says it all.

Second two years ago and arguably should have won. Was then injured and has only run 4 times, in low grade races, since. He’s a leap of faith.

Result: Couldn’t sprint with the other two. A fabulous effort nonetheless for such a horse light on runs and up in age. 3rd

Disappointing in the Caulfield Cup. Pass.

Result: Disappointing in the Melbourne Cup. Couldn’t run the distance and out-classed. 21st

Result: Got some money this time by sneaking into the top 10. Again it proves one of the golden Melbourne Cup rules of failed before means fail again. 10th

International runner in poor recent form and no preparation run. No.

Caulfield Cup winner at $31. Says a lot about the horse and the race.

Result: Failed to run the trip and out-classed. 15th

Result: The first one beaten. 23rd

A Scottish horse, so would be a great irony if it could win for Britain before an English horse does. Won “Britain’s Melbourne Cup” – the Ebor in York – which only rarely is a good guide to the Melbourne, and that’s when the winner wins impressively. Not this year. Nakeeta only snuck in. Because the Ebor is a handicap, it’s often regarded as a poor race and good horses generally ignore it.

Result: Ran on late after being left behind in the sprint. A good result overall. 5th

Result: The jockey said the horse was flattened, was shuffled back four pairs than preferred, and never recovered. That’s always the fear with mares. 17th

With unsuccessful attempts at both of his 3200 races, only a doubt at the distance here. An international that finished second in his preparation run in the Herbert Power, and drops 5kg for the Melbourne Cup. It’s the pattern Protectionist’s year in 2014, except he was German and Wall Of Fire is English. If it’s a slower pace, I can imagine Wall Of Fire sprinting clear, otherwise his run will end 200 metres out, or sooner.

Result: Even though he clearly didn’t run the trip, a bit better was expected. 16th

An international without a preparation run and seems a plodder with recent runs up 4355 metres. These types typically get out-sprinted.

Result: From the same stable as Max Dynamite and Wicklow Brave, so the trainer definitely knows his stuff, and collectively the three horses won over $700,000 in prize money. Otherwise, he was always a plodder and got left behind in the sprint. Another 800 metres and he might just catch them. 6th

Result: Obviously coped with the big field and the weight difference to the older horses told in the end. In retrospect, with his good form in Europe and the lower weight, was obviously up there as one of the leading internationals. The problem is you don’t know. No preparation run and a 3yo, historically it means failure. 1st

A mare that ran poorly in the Caulfied Cup. Yes, despite the heroics of Makybe Diva between 2003 and 2005, mares have a poor record in the Cup.

Or “kiss my arse” as always hearing the name evokes. Yes, kiss my arse for its chances too. A Gai Waterhouse horse, and she’ll tell you it will win in a canter. Will most likely lead until being swamped heading into the straight.

Result: Despite being out-classsed, stuck on well enough. 13th

I’m locked into Marmelo. Although, if it fails, I’ll swear off the Caulfield Cup as any sort of a guide. Then it’s a toss up between Red Cardinal and Wall Of Fire. The former arguably has the best credentials and is an international without a preparation run, while the latter is only just behind on credentials and has a distance doubt. Red Cardinal will be at juicier odds so that most likely will sway me. In fourth I’ll stick with Johannes Vermeer. For an outsider, I’ll go Libran.

Remember, it’s only gambling if you lose!

So an international horse without a preparation run in Australia wins the Melbourne Cup. It’s only the second time since the first time in 1993. Overall, it was a sterile, bland Cup. Rekindling wasn’t heavily favoured even by those “in the know”, while conspicuously quiet post race. If the second and third placed horses, Johannes Vermeer or Max Dynamite, had won, things might have been different. Without trainer Joseph O’Brien beating his father Aidan O’Brien to winning the Cup, there wasn’t even an interesting story from this year’s race. The only Cup more underwhelming than this one was 2012 with Green Moon.

Despite a first-up international winning, the lesson still is to largely ignore such horses. While Max Dynamite followed his second from 2 years ago, the rest mostly failed, with the next best Nakeeta in fifth. Favoured horses such as Red Cardinal and Wall Of Fire finished 11th and 16th respectively. Each year, while one or two will race well, it’s a lottery to know the exact one. The second lesson is distance. At least half the field failed to run it out. Third lesson is class. Other than Big Duke in fourth, the outsiders ran as expected. Then there’s the Caulfield Cup. While Johannes Vermeer finished third in it, again it failed to produce the winner… nor the third placed horse, nor fourth, nor fifth… all the way up to eighth. Marmelo was the next best in ninth.

Johannes Vermeer will be one to watch next year. Near winners do have a good record the following year as they are often a bit stronger and tougher and haven’t suffered a weight penalty. Unlike the winner, in this case Almandin, which is typically penalised around 4 kgs for the following year The question for Johannes Vermeer is whether a precocious lightweight will emerge. That’s why he was beaten this year. 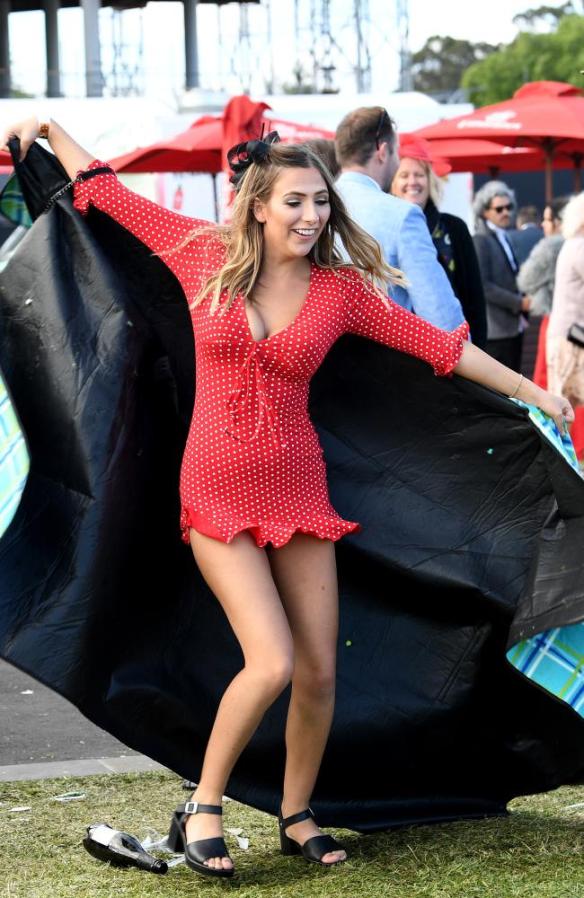 Personally it was a wipeout. Johannes Vermeer needed to win for me as I never bet place. With the likes of Marmelo, Red Cardinal, Tiberian and Wall Of Fire all failing, all my multiples went up in flames. Oh well, there’s always next year… and the year after… and the year after!